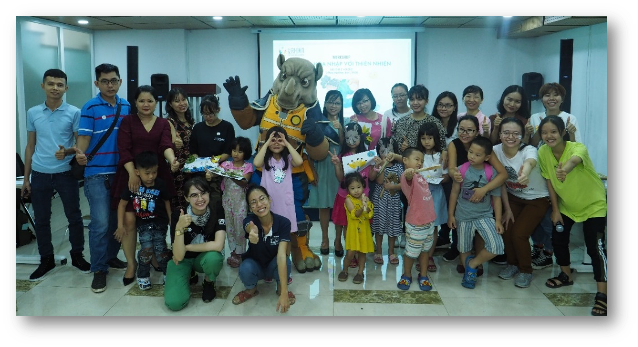 The Wild Rhino Demand Reduction Campaign has been active in Vietnam since 2014. The main aim of the campaign is education and awareness of the rhino poaching crisis in Vietnam through appearances and talks at various events at schools, business chamber events and through partnerships through Universities in Hanoi and Ho Chi Minh City. The campaign has achieved a number of important successes and milestones since its inception in 2014 and further increased its reach in 2019. The first half of 2020 was impacted by the Covid-19 pandemic but through existing partnerships, the social media campaign and work completed by the Youth Ambassadors before Vietnam was also restricted by social distancing restrictions, good progress was made on the campaign and importantly the momentum and local goodwill has been maintained.

Highlights for the first half of the year include on-line awareness activities with the first webinar completed with a new school in Hanoi as well as supporting Saigon Children Charity Trust virtually with a Rhino Ranger Dance performance and dance tutorial on-line through Facebook. Towards the end of quarter two, Vietnam slowly started easing their shutdown and Rhino Ranger was able to complete a guest appearance and the campaign supported one workshop with a new partner. On the Social Media front the campaign reached a new milestone of reaching 1.3 million people on Facebook, sharing the message and making the call to action for more rhino heroes: Don’t use rhino horn.

Keep an eye out for some exciting activities coming up soon.

Thank you Vietnam for being heroes for rhino!