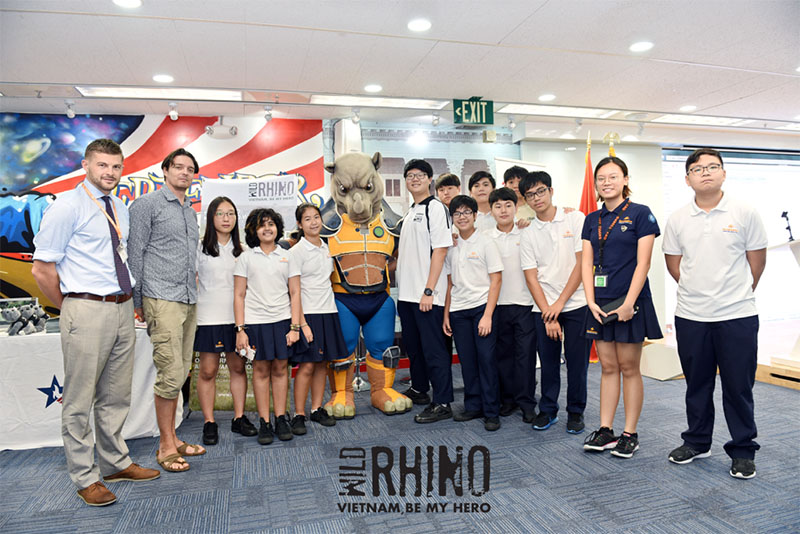 On September 21, 2017, the Wilderness Foundation Africa team in Vietnam, along with 8 of the Wild Rhino Youth Ambassadors and various local NGOs came together to raise awareness of World Rhino Day, with support from the American Center of the U.S Consulate Ho Chi Minh City.

The event, attended by the U.S Consulate representative, representatives and volunteers from participating NGOs, and students and teachers from the Wild Rhino Competition’s participating international schools, educated those present on rhinos, the poaching crisis as well as the issue of the demand for rhino horn in Vietnam.

The video was filmed by Peter when he was on a wilderness trail in South Africa in July. It not only tells the audience about the amazing experience that he and his fellow ambassadors all had in South Africa, but also the inspiring lesson they all learned from the trip that every animal on the planet, including humans and rhino, all shares the same breath.

The video was a great way to introduce the presentations of the Wild Rhino Youth Ambassadors. To start off, they shared their stories about how they first engaged in the issue to join the Wild Rhino Competition. Each of them had their own unique stories but all these stories inspired them and brought them together to have the most meaningful experience in South Africa.

They told the audience of their experience, their feelings, what they had seen, what they had learned and the connection they felt during the 5 days in the wilderness. There was so much to learn and to see. After everything they’ve been through together and the moments they shared with one another, they came back to Vietnam and brought back 4 main take-home lessons that have inspired them to make the changes.

In closing their presentation, they wanted to inspire the audience in Vietnam with these lessons they had learned.

They also mentioned that their time in the wilderness has made them realize how small and vulnerable humans actually are compared to nature. Yet, as Jay mentioned, “for so long we have been sheltered and protected in the comfort of cities that we’ve built”, we humans “have lost our own sense of vulnerability” which leads to the disconnection and the disrespect to nature and wildlife. Jay also shared his team’s story of an elephant that visited his camp. Instead of attacking them which an elephant has all the power and capability to do, “it just simply chose to walk away.” At the moment, he realized that “how selfish we are as a species, they welcome us into their habitat with open arms. But we forcefully remove them from their shelters” with violence. What we need to do is find that “lost connection with the environment once more.”

After the presentation, the 8 Wild Rhino Youth Ambassadors and others joined the panel discussion with three guest speakers from the local NGO organisation ENV and CHANGE. The discussion raised a lot of questions of how we can work to protect the rhinos and stop the demand for the horns in Vietnam. In the end, as the speakers agreed, we cannot only educate the young generation, but we have to raise awareness and change the mindset of the adults as well.

This event successfully created a voice for rhinos and everyone who loves this gentle creature on World Rhino Day.